The Professional Rodeo Cowboys Association (PRCA) is the world’s premier rodeo organization. Check out the current WEATHER GUARD® PRCA Standings 2022 – in accordance with the money won during the regular season, the Justin Boots Playoffs and Championships, and for many bull riders, the PRCA Xtreme Bulls Tour. In this blog, we will look at the latest PRCA Standings by division. 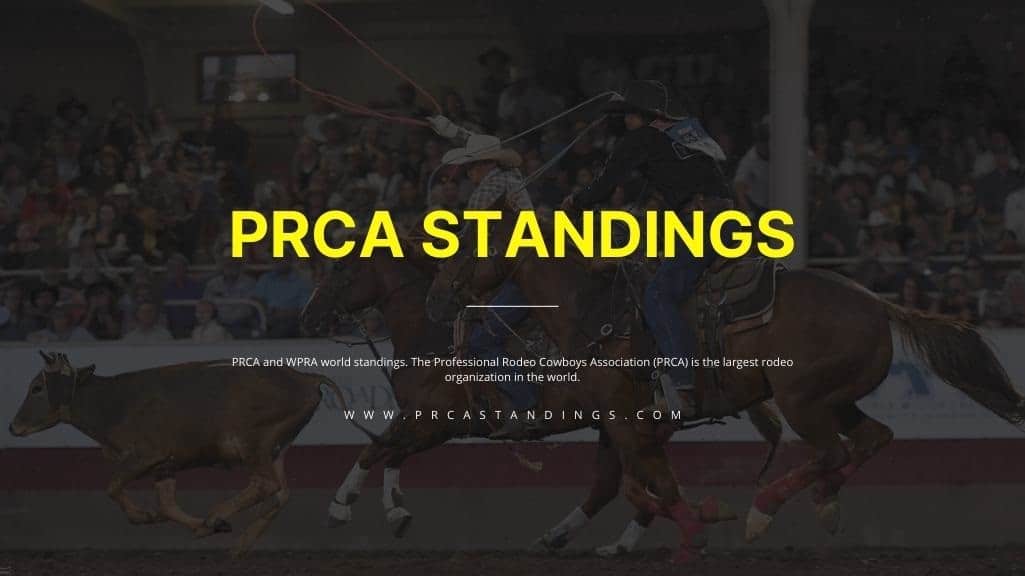 PRCA All Around Standings 2022

The top twenty contestants and earnings are listed here as provided on the Professional Rodeo Cowboy Association (PRCA). Check out the latest All Around PRCA Standings:

What is PRCA Standings?

The Professional Rodeo Cowboys Association (PRCA) is a professional rodeo organization that oversees rodeos and cowboy standings across the United States. The PRCA Standings is a ranking system that tracks a cowboy’s points and earnings from each rodeo they compete in. The standings are used to determine who qualifies for the National Finals Rodeo (NFR) – the PRCA’s premier event.

PRCA World Standings is a ranking system used by the Professional Rodeo Cowboys Association (PRCA) to determine which cowboys and cowgirls are the best in the world. The PRCA World Standings are used to decide who will be invited to compete at the prestigious National Finals Rodeo (NFR). 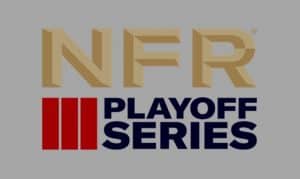 The top cowboys and cowgirls in the Professional Rodeo Cowboys Association (PRCA) compete in 50 of the largest regular season rodeos across the United States. They try to earn points towards the

tour finale, which is held in a different location each year. In 2020, the finale was held in Rapid City, South Dako

ta due to the COVID-19 pandemic. In 2021, it moved to Salinas, California, and it will return to Puyallup, Washington in 2022. Cinch Jeans will be the title sponsor of

the Playoff Series rodeo tour beginning in 2023. The tour, which was previously known as the ProRodeo Tour, will relocate to Sioux Falls, South Dakota in 2023. The Pla

yoff Series is a points-based rodeo tour, with the competitor who earns the most points in each event at the end of the season being crowned the Playoff Series cham

pion. While money won on the tour does count toward the world standings for the National Finals Rodeo (NFR), The Playoff Series is its own separate rodeo tour. 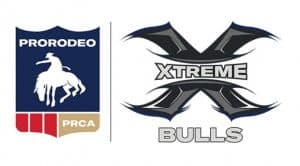 The PRCA has sanctioned events called the Xtreme Bulls tour since 2003, which feature bull riding competitions held in conjunction with a handful of the PRCA’s hundreds of annual rodeos. Forty PRCA bull riders compete in a select rodeo arena over the course of one or two days, and the top 12 riders based on scores advance to the championship round. The rider with the most points on two bulls wins the event. The PRCA awards an Xtreme Bulls tour champion every year. This is the rider who earns the most money on tour. Bull riders must compete in at least forty complete PRCA rodeos to have their winnings count towards the National Finals Rodeo. The Xtreme Bulls tour has had Division 2 events since its first year, where riders try to earn spots in the main Division 1 events.

The PRCA (Professional Rodeo Cowboys Association) approved the tour in 2016 and it has only featured saddle bronc riding competition since. Like the Xtreme Bulls tour, these events are held in conjunction with a very small amount of the PRCA’s several hundred annual regular season rodeos.

The National Finals Steer Roping (NFSR) is an annual event held every November in Mulvane, Kansas, where the top 15 steer ropers in the PRCA world standings compete. This event is separate from the National Finals Rodeo (NFR) and different from the National Circuit Finals Steer Roping (NCFSR). After two days of competition, the contestant who has won the most money throughout the season, including at the NFSR, is crowned the PRCA world champion steer roper. Since 2019, the Legacy Steer Roping Finals have been held in conjunction with the NFSR.

The Permit Member of the Year Challenge is an annual event held by the PRCA in which the top five permit holders in each of the standard male rodeo events at the end of the regular season compete for the chance to be crowned the Permit Member of the Year in their respective events. This one-day event is usually held every December at the South Point Hotel Arena & Equestrian Center in Las Vegas, Nevada, just shortly before the start of the National Finals Rodeo. However, due to COVID-19 restrictions, the 2020 edition of the event took place at the Cowtown Coliseum in Fort Worth, Texas. The five money-earning permit holders who had earned the most money throughout the year competed in two rounds each. The winners of each round were crowned the Permit Member of the Year. The Permit Member of the Year Challenge had been held since 2009. In its first five years, only the roughstock events (bareback riding, saddle bronc riding and bull riding) were featured. The timed events (steer wrestling, team roping and tie-down roping) were added in 2014. 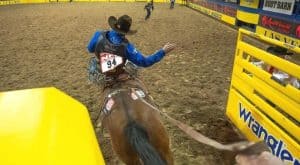 At the end of every regular season, the top 15 money-earning PRCA discipline winners (including the top 15 “headers” and “heelers” in team roping) are sent to the National Finals Rodeo in December, more commonly known as the NFR.

The National Finals Rodeo (NFR) is held over 10 consecutive days, with the top money winner for the year crowned the year’s PRCA World Champion in each discipline at the end of the NFR. Because of the large amount of money (10 million dollars) at stake in the NFR, the leaders in each event going into the NFR are often dethroned for the year’s championship at that event.